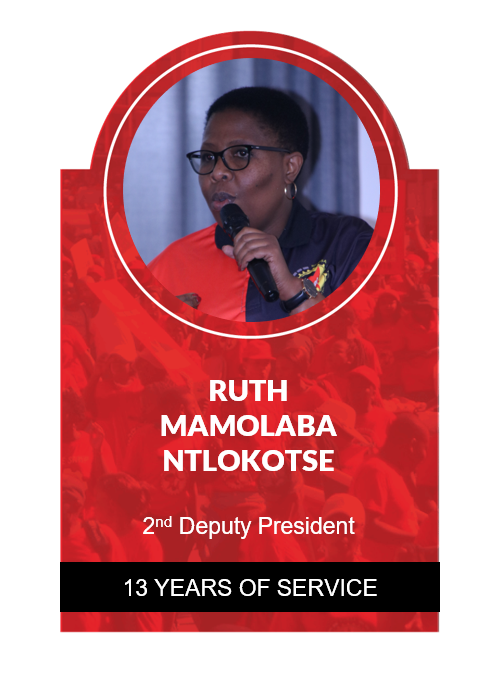 Ruth Mamolaba Ntlokotse was born and raised in Soweto. She is the third among her siblings in a family of 4; two brothers and one sister. Ruth attended school in St Matthews Catholic school in Rockville. She matriculated in 1991.

Due to financial difficulties, Ruth pursuit her tertiary education from 1994 where she registered with Technikon Witwaterand to study Diploma in Analytical Chemistry. As a student activist she was a member of SASCO and SCM.

In order to complete her diploma, she did her in- service training at Johnson Matthey in Germiston, where she was later employed in 1997 as a laboratory Analyst.

Ruth became actively involved in the work of the trade union, she served in different roles;

Ruth is a firm believer of capacity building of Shopstewards through worker education in order to defend workers against the unfair effects of globalization.  She studied through a union driven program; social theory. Upon completion of the program, through the union    she enrolled   at University of Witwatersrand to study BA. She graduated in 2015 in BA in Politics and International Relations. She furthered her studies and graduated in BA Hons in 2018. She has registered for MA and busy with her research work.

Ruth is an advocate of emancipation of women in society, she believes in enablement of women. She is involved in programs and campaigns which makes women to trust their own voice and begin to speak for themselves.