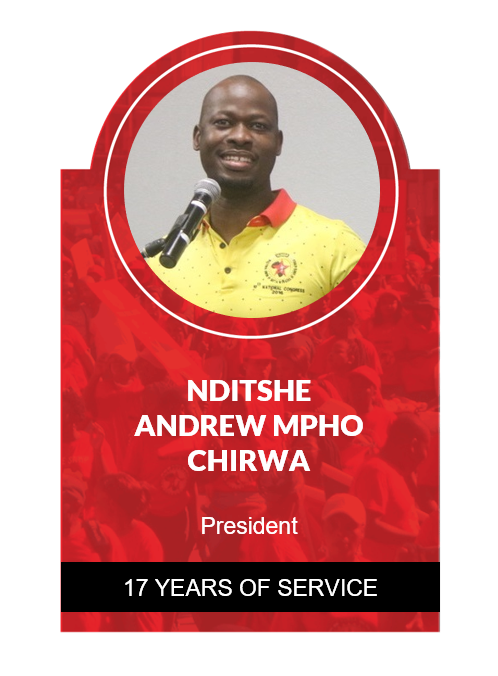 Joined the union on the 1st of September 2001 at Ford Motors, Tshwane. It was the very same day he started working. “I understood the importance of the unity of the working class to attain its mission and to defend itself, something I learnt during my student activism days. So it became easy for me to join the union and participate in its life from plant level to national level of the organisation”.

In 2003 Andrew was elected for the first time as a shop steward, I agreed as I was convinced that there was a need to challenge and fight the exploitation, and the racism that continues to exist and thrive even under a black democratic government in our workplaces. I also agree and believe in Karl Marx’s notion that the means of production should be owned and controlled by the masses through the workers commities. And it is through the leadership of the working class that this can be fulfilled in its truest form.

In the 2012 National Congress that took place in KZN, Andrew was once again fated to replace Phil Mokaba as 2ND Deputy President. Two months into his new position Marikana Massacre happened where the union and the working class movement found itself in a turning point where the political landscape for the working class changed for the worst, therefore the union  had to review its policy positions.  The outcome then forced the union to a special central committee where it was decided to call for a Special National Congress  in 2013 where the Union took a number of historical decisions. This saw Andrew get elected as the new President of NUMSA.

Andrew has also held the follow positions throughout the years whilst the chairperson and President:

“the working class are its own defenders, and must understand that socialism and the control of the means of production will not be given to us voluntarily we will have to fight by all means necessary for these ideas that we must hold dear and never dishonour. FORWARD WE GO, BACKWARDS NEVER!!!” –  Andrew Chirwa, Numsa President.