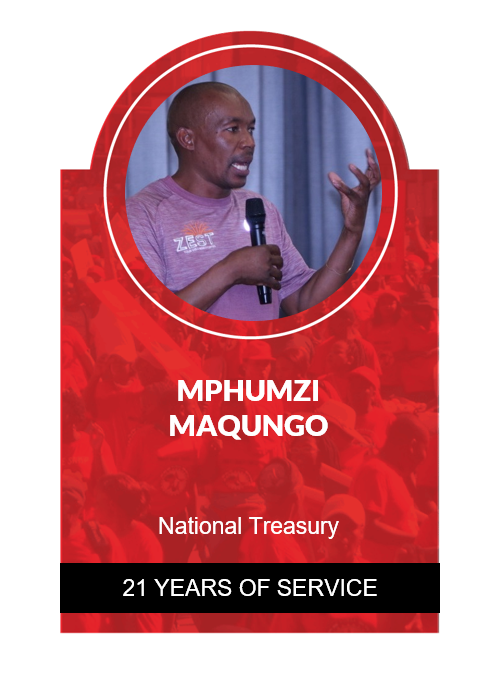 The National Treasurer began his journey with the organisation since 1999, when he was elected as part-time shop steward at Delta Motors Corporation that is now known as Isuzu Motors. He came from humble beginnings starting at the paint shop in 1996. “I remember very well how I was elected, it was unexpected. In this particular meeting I was not even paying attention as I did not think I had any type of knowledge as to whom should be picked I was fine with whomever that was going to be elected, little did I know that I was going to be elected not just as a shop steward but in addition I was also elected as the plant secretary.” Here he was sitting reading a newspaper in the plant meeting and he hears his name being put forward as a shop steward.

I began to attend more union meetings where I was chosen again from 1999 – 2000 as a representative in IMF. He then became a full-time shop steward in 2004 and was subsequently elected as the Regional Finance Committee member, of the Eastern Cape. He replaced his then regional treasurer in 2012, where he was the regional treasurer for only two months.

In June 2012 at the NUMSA National Congress he was elected as the National Treasurer, a position he continues to hold.

He has held the follow positions throughout the years as a treasurer:

“I never saw myself as a finance guy, I had no interest but my comrades deployed me into the treasury, I guess it was fate. When I started all I wanted to do was help change the poor social conditions my people where subjected to, conditions I was also subjected to by the apartheid government. And to represent those who are unfairly treated and undermined in the workplaces. NUMSA is a worker control union It is imperative for the members to participate, if the working class is to grow and take control. . KUBO KUBO MAQABANE!!!” Mphumzi Maqungo – Numsa National Treasurer