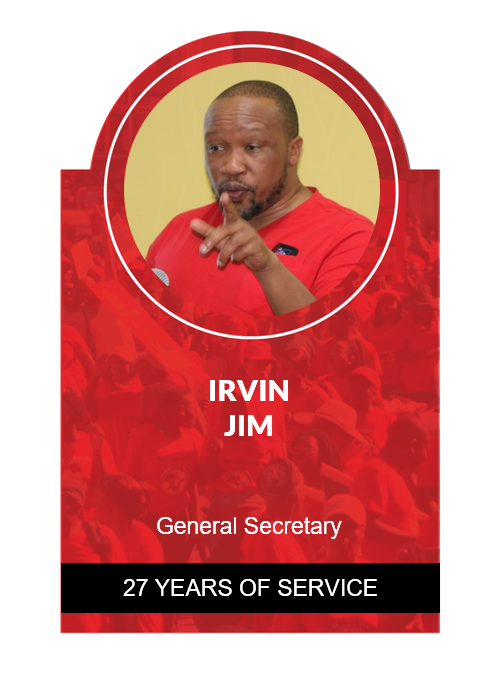 Irvin Jim is the General Secretary of the National Union of Metalworkers of South Africa (Numsa). He is currently serving his third term as General Secretary, having been re-elected to serve the militant metalworkers in its December 2016 elective congress, following his first election in October 2008 and re-election in June 2012.

Following the fall of the apartheid regime in 1994, Comrade Irvin became the regional chairperson for Numsa’s Eastern Cape region. He later served as the Regional Secretary. He was at that time the youngest member of the Numsa Central Committee and remained in the regional leadership until his election to his position as General Secretary.

Poverty forced him to abandon his education in order to work in a Port Elizabeth tyre factory. In 1991, on only his second day at work, his fellow workers at Firestone Tyres nominated him as their union representative. Aged only 23, he turned down the nomination that day but within three months had taken on the role of shop steward, and two years later that of full time shop steward.

Now, as one of South Africa’s most senior and prominent trade unionists, he is both loved , revered and despised, his political adversaries have called him a “sponsored agent” and “populist demagogue”, those in the state have accused him of “an infantile disorder that manifests as an acute aversion to anything rational”, the media have referred to him as a “charmless ideologue” but for those who know Irvin Jim, who and what he is was best captured by one political analyst, “Irvin Jim is the left. He’s not doing this to create some rhetoric to get something. It is the political tradition he was brought up in and one that he believes in.”

Nothing can be truer. He is a proud Marxist, who claims “The history of all hitherto existing society is the history of all class struggles” as his favourite quote, the bane of the ruling elite and its sycophants, is misunderstood by the chattering classes, and is undoubtedly a hero of the working class and the poor. He holds strong views and convictions, but is always ready to defend them. By his own acknowledgement he can sometimes be “rough” but his beliefs are heartfelt, his commitment to class struggle unwavering, his passion for resolving workers issues unflinching, his responsibility towards a united and consolidated union unquestioning and among his staff and comrades he is warmly looked upon for his kindness, compassion and easy accessibility.