The National Union of Metalworkers of South Africa (NUMSA) welcomes the decision of the Labour Court yesterday (31 August) which decisively dismissed the application by National Employers Association of South Africa (NEASA) and the South African Engineers and Founders Association (SAEFA) to interdict the Metals and Engineering Industries Bargaining Council (MEIBC) from submitting a request to the minister of employment and Labour, to gazette the 2021 Main agreement. NEASA and SAEFA also wanted the court to interdict the Minister from extending the 2021 Main Agreement to non-party employers and employees in the metal and engineering industries. These right-wing employers approached the Labour court on an urgent basis for relief on the 23rd of August 2022.

NUMSA is a party to the MEIBC and we were instrumental in the agreement which was secured. Last October NUMSA members embarked on a 3-week strike in the engineering sector which resulted in the agreement being signed with SEIFSA the largest employer body in the engineering sector. The strike was settled after we signed a 3-year agreement. The essence of the agreement between NUMSA and SEIFSA is that workers will receive a 6% increase on the scheduled rates of pay for year one, year two and year three on a moving base.

NEASA approached the Labour court over a meeting which took place on the 29th of June 2022, where the majority parties of the MEIBC voted to request the minister to extend the consolidated Main agreement to non-parties. NEASA was defeated in the vote as all employer parties present in the meeting voted with the trade unions, except for SAEFA which was absent. NEASA and SAEFA are aggrieved with the majority rule and they approached the labour court to set aside this decision and also to seek the relief stated above.They argued in court that the council meeting was “unlawful, irregular, procedurally flawed and contrary to the objects of the LRA.” Consequently, these right wing employers were seeking to review this decision by the MEIBC and pending the review, interdict the MEIBC from submitting the request to the Minister.

NEASA and SAEFA are the only ones who refused to sign the main agreement out of 19 parties. They were trying to impose their will as a minority onto the majority, using the courts, and we condemn them for it. We are grateful the courts saw right through their attempts to subvert democratic processes and their right-wing agenda was thwarted. Had they been successful they would be the only ones to benefit at the expense of all other parties. It would have meant that hundreds of thousands of workers, particularly, Metalworkers would not be getting an increase because of their selfish actions.

NEASA has been frustrating collective bargaining and because of them, the collective agreement has not been gazetted since 2011, thus denying hundreds of thousands of workers’ their increase. These selfish employers were attempting to single-handedly undermine the principle of collective bargaining.

Once the Minister of labour gazettes the agreement as moved and supported by NUMSA, other unions and the majority of employers and all workers in the industry will receive this wage increase.

This is a victory for all workers and we urge them all to join NUMSA in their so that together we can ensure that every employer in the engineering sector implements this wage increase of 6% for the period of three years. Once this agreement is extended NUMSA will legally be in a position to force every employer to effect the increase in engineering and in the plastic which is a sub-sector of engineering. Below are tables that unpack what each worker in engineering and plastics will receive according to their grades:

Engineering wage breakdown for the duration of the agreement 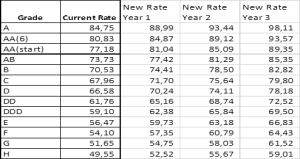 Plastics wage breakdown for the duration of the agreement 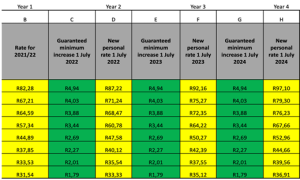 We welcome the decision by Judge Snyman to dismiss the application in its entirety. It was a humiliating loss for NEASA and SAEFA because their motives were exposed. These reactionary employers have been ordered to pay all the costs of what we view as a frivolous application, designed to frustrate the fair process of extending the wage agreement.

Our focus now is to do what is necessary to get this agreement gazetted and extended as soon as possible for the benefit of all workers.